And, finally after singing Schwan year after year in the classroom, singing it on stage in front of a sold out Hallenstadion was a little like being grafted into Swiss music history for this native Texan. “Even though Gölä is doing his English thing now, his music along with Polo’s and Plüsch´s were my introduction to Swiss pop music. Those songs will always hold a special place in my heart and have become a staple of my secondary school curriculum. And singing it with Lesley, who was on the original recording, was the best thing that ever happened to my Bärndüütsch!” quips Hedreich, who also sang it at the VIP After party in Swissôtel.

And speaking of the after party, word has it that Hedreich is also a fine drummer who can hold her own with some of the best musicians in the business. After singing a few soul standards with Gary Scott’s band, Hedreich rocked the house by turning jam session drummer and hitting with Alex Auer (Gitarrist von Xavier Naidoo), Nikolo Kotzev und Wayne Banks(Gibb’s rhythm section sans Drummer) for a few tunes. The groove was enough to lure ice skating favorite Stéfane Lambiel op to the mike to do a crowd pleasing rendition of “Knockin’ on Heaven’s Door”. And to round it all out, before her 3 inch heels drilled a hole into the bass drum pedal, Hedreich even managed to sing out a few good lines of “We Are Family” while playing. The crowd sang along and a good time was had by all.
And what’s on next? Music, music and more music—the paper kind. Except for appearing with Gölä in a quartet formation at the end of the month in Bern, Hedreich will finally have time to start moving the mountain of paperwork on her desk. In addition to the usual number crunching that goes along with this time of year, Hedreich will be meeting some deadlines and putting a backlog of arrangements down on paper. Need school choir, band, Gospel or Pop arrangements?
Send Hedreich a mail, perhaps she’s got just what you need. 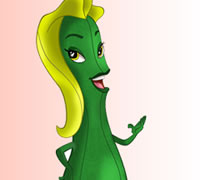 Oh, and unlike a few of you thought, Hedreich is not the disco queen, she’s the crunchiest pickle in the land, “Chiratbella” winner of the Chirat Casting! Better go back and listen a bit more closely!! And come back again soon to see—and hear– what Hedreich’s got going on. Recorded or live, you’re sure to like it! www.chirat.ch

After a whirlwind schedule (not packed houses schon wieder!) during November and December, Hedreich would usually be enjoying a bit of downtime—and snow. But this January has not been only unusually warm, it’s been unusually busy. The last weekend of the month sees Hedreich doing songs from some of her favorite musicals with the Flums Brass Orchestra in “Pantasia“. 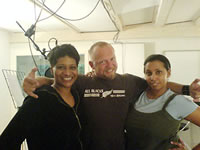 And as soon she yodels her last yodel in Sound of Music’s “Lonely Goatherd” she heads straight to rehearsal with the all new Gölä band. That’s right folks; Hedreich’s going serious Rock ‘n Roll!! The beloved “Bärner” kicks off his return to stage on the 1st of February where Hedreich and other top musicians will be helping him to do his thing in front of huge Hallenstadion and Patinoire de Malley audiences at Art on Ice. Hedreich will be bringing to life the background arrangements she created on the CD due out this month. And she’s looking forward to see if Gölä can remember all the stuff they worked on in their vocal tutoring session. “Gölä was one of the quickest studies I’ve ever had”, muses Hedreich. “I wish every student could grasp and implement vocal concepts as quick as he can!” Check out some more studio pics here >>

For those of you who missed out on getting tickets, check your local listing for the upcoming TV broadcast. And if you’re one of those people who misses this event because you can’t tear yourself away from MusicStar, watch for the Chirat “casting” commercial and see if you can figure out which is the voice of Hedreich. Not into TV? Try watching it on www.chirat.ch where you can even download her voice as a ringtone! In next month’s news you’ll find out if you were right so don’t forget to stop back by.

Whew, there’s a lot going on these days! The end of 2006 saw Hedreich wowing packed houses throughout Switzerland and celebrating Christmas in a big way under the big top in a dazzling appearance with her choir at Knie’s Salto Natale.