This year has been a year full of big changes for our favorite singer and teacher. For those of us who follow her tweets, we’ve not been quite sure which continent she’s on at any given moment.

So for inquiring minds, Hedreich was on hand for Jeff Strain, long time friend and CEO of Amante International to answer a few questions  about the reasons behind the re-launch of hedreich.com.
Enjoy! 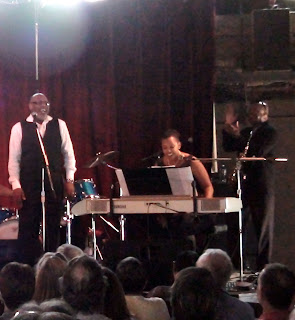 Just as Marfa, Texas is known for it’s preternatural light display, the 3rd anniversary concert of  Padre’s will definitely be remembered for keeping with the region’s reputation! The exceptional idea of having 3 divas in the desert  performing for an eclectic and illustrious audience from just about everywhere, made for a musical manifestation that equaled any one seen on the horizon.  With a red-hot rhythm section carrying melodies from Hedreich as well as Caretta Bell, April Sloan-Hubert  and Horace Alexander Young on Sax, the program was as diverse as it was consummately entertaining.
On another note, this will be the last post before hedreich.com goes 2.0. Nothing too radical, just a few TNG tweaks here and there. Stop back by late Friday for the launch and an interview with our favorite singer by Jeff Strain of Amante International.