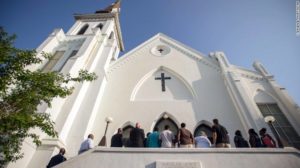 As we celebrate the 1 year anniversary of those 9 souls senselessly gunned down in cold blood at the historical Emanuel AME church, we find ourselves once again, as a country, praying for peace and healing in Orlando where 50 have died. We find ourselves also, once again, divided by things that should have no bearing: race, sexual orientation, politics, blame. Instead of being outraged at the continual violence and the grief that loss of life produces we are angry and casting blame. I’m angry too. I have to explain to a 12 year old that the world, in spite of what we see in the media daily, is not a horrific place full of danger, hatred and violence. To do that, I have to be convinced of it myself. Today, that’s not an easy task. But I am looking for the helpers. I recently read a mom’s words to her children: ‘whenever you see bad things happening, look for the helpers. There are always more helpers than bad guys’. Simple but effective. Look for the helpers. Be a helper. I’m doing both while holding on to the unchanging Lifeline who always makes beauty out of even the biggest heaps of ashes.