If you haven’t gotten your signed copy of Time Now by now, you’ll have to get it after a concert! Don’t want to wait? Then have it delivered quickly and easily to your home. CeDe.ch, one of the most artist friendly companies in the land is now responsible for Time Now’s distribution. With promotion handled by Dasoffice.ch, the road to success is paved! And if you’d like to celebrate with us, we’ll be offering the perfect alternative to soccer with the release party on June 11th. Details to come!

Time Now will be widely available as of May 21!! Ask for it in your local store or order it on cede.ch! Of course, there are still a few signed copies available here on hedreich.com so grab one now. And if you want to be at the not-to-be-missed release party, mark your calendar for June 11th. Details soon!

As if that isn’t enough excitement 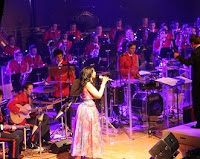 , Friday in Chatel St. Denis was the Swiss Army Concert Band’s 2010 season opener and a worthy start it was! Hedreich was in her element as she added the feminine shine to the world class military orchestra with songs like “Everybody Loves A Lover” , “What Now My Love” and the signature “Listen” which you’ll remember from Art on Ice 2009.

While Capital FM’s Nik Eugster is a great guy, he had nothing to do with our artist’s radio interview. If you were listening to 97.7 in Bern last week you heard her on the Simon Stalder Show singing
a Swiss-German “Bond hymn” that she had to compose on the spot with Simon looking over her shoulder. The resulting tribute was well recieved by listeners, but word on the street is that there could be some form of revenge on the delightful host Simon…

After the musical warm-up on Capital FM, Hedreich introduced songs from Time Now at Bern’s du Nord. The Groove Factory band manufactured some SERIOUS grooves and by the end of the evening people were coming in off the streets to join the party!